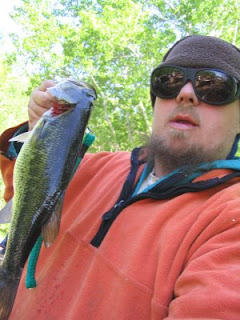 Originally this tournament day was slated for Gull Lake, but due to the Minnesota Teen Challenge Tournament, they switched to Cedar Lake West of Aiken. I wasn't at the meeting when they made the switch and when everything was out on the table I was not happy about the switch. All that was left was to make the best of it and I didn't.

Going in our plan was to fish cabbage weedlines/weed beds and hit lots of docks. The forecast called for it to be sunny and mild but with 20-30mph winds out of the NW. A front came through the night before tournament day, so it was high pressure, post-frontal conditions. The tournament was from 7AM to 3PM For the 1st hour of the morning the winds were manageable and we were able to effectively fish a weedline/weedbed that was in the wind. I started out throwing a salt and pepper Zoom Trick Worm and got the first fish of the day for our boat, unfortunately it was a rock bass. Actually my partner Adam had the first bite of the day, it was a pike or muskie that bit him off on the strike. I got the second fish of the day and it was a small Northern Pike. I got the 3rd fish of the day and it was an 11.75" in largemouth bass. The minimum size is 12" so back in the lake it went. My partner Adam then got on the board with a solid keeper. On this weedline I would land 3 more largies that were just a little bit short of 12". We basically worked through the area one and a half times and stopped getting bit so we went to some wind protected docks. I believe Adam landed 1 good keeper off the docks. Next we went to some docks that were in the wind, but the wind wasn't terrible yet, and didn't get anything. Next we fished a cabbage weed point and Adam got a couple more keepers and I landed a couple more that were just under 12", I also had a bite that stripped the Zoom Speed Craw off my Brovarney Swim Jig. The wind really started whipping when we fished this spot.

Next we went to a point/cabbage weedline/weedbed that was in the wind. The spot looked great but to fish it effectively in the strong wind it called for horizontal presentations and the fish if they were there were having none of it. I don't think we even got a bite on this excellent looking area. Next we hit some more docks that were pretty much wind protected and I picked up 2 keepers on a bubblegum Zoom Super Fluke. I felt really fortunate to get the fish because by now I had learned that Adam is excellent at skipping jigs at docks with a baitcaster, very accurate and efficient.

We went to fish some more semi-wind protected docks and Adam picked up fish so he started culling. I got on the trolling motor while Adam was culling. I was coming around the end of a boat lift when I made an errant cast and got hung up. Not wanting to disturb the spot I broke off. Before I knew Adam was back fishing again he had a nice bass in the boat that just nailed his jig when he fished it in the spot that my Fluke should have been. Basically blowing this great opportunity to add a 3rd solid keeper would really cost me because for the next couple of hours things got really slow for me. Meanwhile Adam was catching an occasional keeper and also got a 30+ inch Muskie on a dock. At one point I believe Adam was culling so I was on the trolling motor and I got a bite on the Fluke and pulled in a 12 inch rock bass.

We were running wind blown docks in some serious waves when Adam added a nice bass in between docks. While he was culling I got a fish on brown Strike King Pure Poison Chatterjig and thought for sure I had a keeper bass, but it was a pike. A couple of minutes later Adam tied into a 40 inch class Muskie which we did land and Adam took pictures of me holding, which he hopefully will email me. 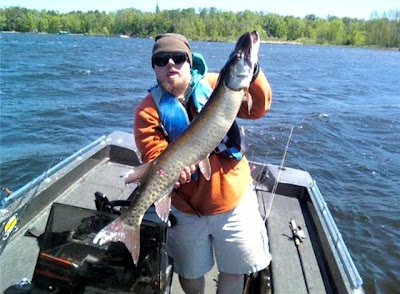 We were on a stretch of semi wave protected docks when Adam got a couple more keeper fish not under the docks but near them, meanwhile I landed a fish that was just short of 12" at around 11 7/8ths. Adam told me to clip it and hoped that it might grow a little in the livewell as he had seen that happen to fish before.

Basically we re-ran a bunch of water we had already fished for most of the rest of the day. I missed one good opportunity with the Fluke and I think Adam maybe picked up one more key fish and got 2 or 3 keepers that didn't help. While we were re-running a bunch of docks in the wind and waves I got my 3rd keeper and best fish on the Pure Poison chatterjig on the last dock in the line.

In the last hour we fished a new wind protected inside weedline with cabbage. I landed yet another 11.75 fish. A little later on my Fluke disappeared and when I set the hook, I thought the line had broke but actually the Fluke just got stripped off the hook. Adam got a keeper that didn't help him under a dock that had just been fished by another tournament boat.

In the last 20 minutes we fished a the wave protected spot that we had some bites off earlier. Once again Adam got a bass that didn't help. Our last stop was on a wave protected shoreline that I don't remember hitting. I got a solid hook up on the Pure Poison but it turned out to be a 25 inch pike and that was basically it.

Other than the fact that the fishing wasn't so great for me, I had a good time on the water with Adam who is a really good guy and excellent fisherman. My choice to not to take the front of the boat other than when my partner is culling probably more than anything cost me a shot at a limit, but it also had to be a factor in Adam getting 2nd place. He has come very close to being club Mr. Bass/Angler of the Year for the past couple of years. I hope he can show the old timers how it's done this season.
Posted by Basspastor at 1:35 PM