Blast from the past. 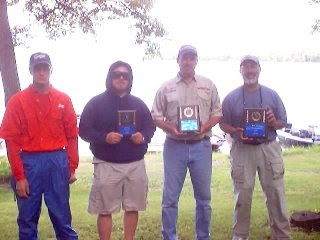 Back in 2004 with the help of my friend Mike Davis I fished 3 Excel Singles events put on by Joel Stokka. The Picture is from Rabbit Lake where I placed 3rd. Some of the best bass anglers in the Brainerd area fish Excel Singles and at Rabbit I was beat by two good one's in Pro Fisherman and Guide Tom Whitehead (brown shirt) and fellow Baxter Bass Snatcher Chuck Fields (blue shirt). I might have placed higher but my kicker was a really skinny fish that could have weighed a 1/2 to 3/4 of a pound more if it was filled out.

Here are my Excel Singles Results from 2004:

6/6/04 Gull Lake 11.88lbs for 12th out of 36 anglers. I had never been on Gull Lake before that morning and it might have cost me because I didn't find the channel that I wanted to fish first thing in the morning. Mike Davis was actually in the boat with me to observe how I went about my tournament day. I didn't go far from the launch point, in fact I caught most of my fish on Flukes and Senko's on the other side (South) of the point where the HQ Ernie's on Gull is located. I was proud of my finish in this one.

7/18/04 Whitefish Chain Skunk! Last out of 30. I had only been on Whitefish once and caught lots of fish that day pre-fishing with Mike Davis; By tournament day they vacated the area and my lack of familiarity with the lake just killed me. The up side is that I won a Fig Rig rod (6'6") in a drawing before the tournament started in the morning. At the dock someone said, "You probably used up your luck for the day when you won that rod." I guess he was a prophet. That rod has served me well, I primarily have used it for Frenzy Poppers, spinnerbaits, and jerkbaits for eye's and bass.

I didn't fish the last two tournaments of the year.
Posted by Basspastor at 8:27 PM